As the Republican’s healthcare plan begins to take shape and the promised repeal and replace of Obamacare surfaces on the horizon, one of the biggest controversies is the topic of tax credits and how the government will offset the cost of premiums. In fact, the debate over tax credits vs. tax deductions has drawn a big line in the sand amongst the congressional members of the GOP. During the campaign, Trump was all about tax deductions, but it seems he is now supporting tax credit provisions in the proposed American Health Care Act, a crucial step that has prompted both uproar and applause across party lines.

While Obamacare tax credits were calculated based on the local cost of insurance, an individual’s income and age, the GOP approach bases those $2,000 to $4,000 credits solely on age, with younger individuals eligible for less and older individuals receiving more and a 10% reduction for those individuals with incomes of more than $75,000 (double if filing jointly). Other things to note: a limit of five people per household can claim the credit and the credits can be obtained whether the plan is purchased on or off the federal or state exchanges.

Our team of analysts has pulled together data to educate you on how this new bill would affect your tax credits, based on your income, compared to those provisions provided by Obamacare. 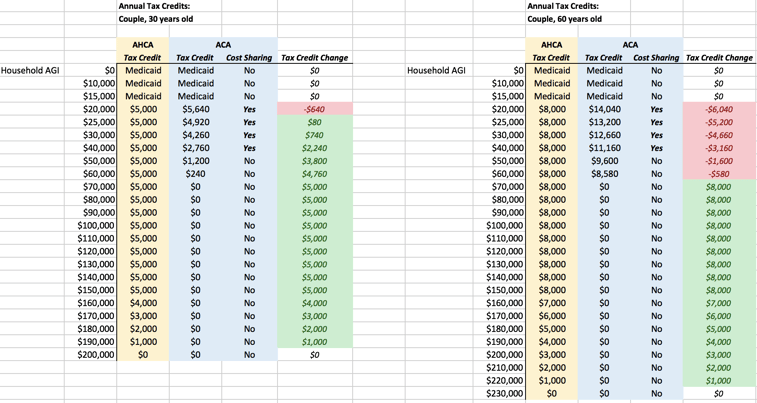 So who are the winners in this situation?

Folks with high enough incomes to be disqualified from aid under Obamacare will now be receiving tax credits. Many would argue that these higher-income individuals don’t need the assistance and oppose spending federal dollars in this way. For example, a 30-something couple making $150,000 a year would receive $5,000 in credits, whereas before they didn’t receive any help at all.

Democrats will look at the losers and declare that the Republicans are only offering tax credits to the rich. Republicans will say they are trying to extend tax-breaks that people who work for companies already receive to middle class members who have to purchase their own insurance (remember, corporate and group plans are purchased on a pre-tax basis, individual plans are post-tax). We worry about the affordability of plans for lower-income Americans under this scheme, but we've also seen plenty of middle class families burned by how Obamacare's credits are currently distributed.

And who are the losers?

An analysis from the Kaiser Family Foundation found that older, low-income individuals would receive much less under the GOP proposal than they currently receive under Obamacare. Based on our research, 60-year-old individuals making between $15,000 and $30,000 would receive far less in credits (upwards of $4,400) and those filing jointly with incomes between $20,000 and $60,000 would receive tax credit cuts of up to $6,040. Expect to hear a lot of opposition to these numbers surrounding older, low-income individuals and couples. The AARP, the advocacy group representing about 38 million seniors nationally, has already been making a lot of noise.

Where do you fall in this new equation?

The truth is, figuring out whether or not you will receive more or less under the proposed plan, if it comes to fruition, is a little blurry since its currently partly based on insurance costs in your location. If you want to take a deep dive, the Kaiser Family Foundation has created interactive maps to compare county-level estimates of premium tax credits consumers would receive under Obamacare in 2020 with what they’d receive under the American Health Care Act.

Since the draft house bill is just a draft, the value of the credits could change. Our team at Take Command Health is committed to keeping our customers and readers informed, especially in the midst of great change and volatility in the healthcare market. We also are taking it a step further and are here to explain why these changes affect you and your family. Stay tuned as we bring you the latest developments!

For complete coverage on the draft house bill, read our CEO's commentary here.

I wrote this blog because I care about ideas (big and little) that can help fix our healthcare system. I used to work on projects for Kaiser Permanente and the Parkland Health & Hospital System so I've seen the system inside and out. It's so important that consumers keep up with industry shifts and changing health insurance regulations. I'm also Take Command Health's Content Editor and a busy mom. Learn more about me and connect with me on our about us page. Thanks!

Health insurance can be confusing and frustrating. We want to fix that, and we need talented people to help us fully realize our long-term vision.

A letter from our founder

Back to All Posts
News

A letter from our founder