The driving force behind the Affordable Healthcare Act was to have more people covered by health insurance. However, there is one loophole that has prevented hundreds of thousand families from getting vital financial assistance to afford healthcare coverage. That loophole is called the “family glitch.”

What is the family glitch?

A hallmark piece of the ACA was the employer mandate. It requires employers with more than 50 full-time equivalent (FTE) employees to provide health insurance to their employees.

Under the law, the employer sponsored health plan premium are required to be less than 9.61% of the employees income. But what happens when you factor in family members? This is where the “family glitch” loophole comes in.

When dependents are added to the insurance plan, premiums increase. However, affordability is only calculated based on the employee’s “self only” coverage and not the costs that come with adding family members.

Since the employee-sponsored healthcare plan is deemed affordable, the family doesn’t qualify for ACA subsidies that would provide vital financial support.

Who is impacted by the family glitch?

The Kaiser Family Foundation estimates that 5 .1 million people are impacted by the loophole - the majority being families with children.

They analyze that nearly 2.8 million Americans impacted by the glitch are under the age of 18. While a portion of these uninsured children will qualify for the Children’s Health Insurance Program (CHIP) or Medicaid, more than half do not.

What is the proposed fix to the family glitch?

Congress and the presidential administrations have been called on by healthcare advocates to fix the glitch since the ACA rollout. The Biden Administration issued an executive order aimed at strengthening the ACA prompting the IRS to announce the guidelines to fix this last Spring.

The IRS laid out terms of fixing the rule. The proposed change is fairly straightforward. Affordability determination would be made based on the cost to cover the employee plus family members (when applicable), instead of just the single employee.

This means if a family has to pay more than a certain percentage of household income for the employer-sponsored plan, they may qualify for premium tax credits (PTC) on the ACA marketplace. 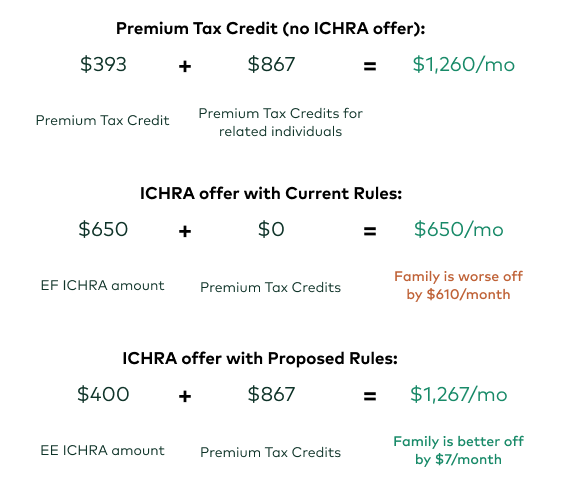 How would the family glitch fix impact health insurance markets?

When the ACA Marketplace was rolled out to the public, it had a famously bumpy start. In those early years (2014-2017), the ACA experienced technical difficulties and lack of carriers.

Since then, the markets have stabilized with carriers re-entering and premiums holding or decreasing in many regions.

If the Family Glitch is fixed, this could potentially send millions of people to the ACA Marketplace.

The Kaiser Family Foundation reports that the vast majority of these families are self-reported to be in good to excellent health. This means the individual market risk pool may remain unchanged - keeping premiums steady.

KFF estimates that if the majority of these people enter the individual marketplace and are healthy, it may help decrease premiums.

While the Biden Administration resolution appears to go in effect in January 2023, there is no guarantee it won’t be delayed. The ACA has been highly politicized since its inception meaning it may be targeted by lawmakers.

Take Command encourages Congress and the administration to fix the family glitch to ensure the future  of consumer-centric healthcare that is straightforward and easy to understand.

We will keep this blog up to date as more information comes in!

With 15 years in the communications field, Briana is a content writer with a passion for making complex issues readable, understandable, and digestible. Her career is layered with experience working with Fortune 100 companies, non-profits, and start-ups. She specializes in employee benefit communication. Briana is a married mother of two young girls in the Midwest. She loves yoga, volleyball, and reading by the pool.

Back to All Posts

Finding the best small business health insurance: a how to guide